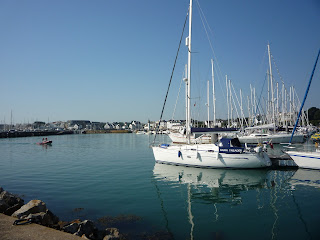 We arrived at 6:45am. Although alongside initially, he spotted a finger-berth on the visitor's pontoon and we moved there. They then went to bed for a couple of hours (Frances hadn't got up yet) to catch up on their sleep (and stop him turning into Mr Grumpy). There were no clouds in the sky and they wandered off later and went looking for more 'provisions'. They were hot and bothered and laden with goodies when they got back. He put the bikes together but one of the tubes was perished so only one was useable - great pre-holiday preparation then! After a walk around the local area they had dinner and went to bed.

Days 208 - 211
They spent their time getting up and going out on their bikes. Most trips were into Port Marie, vey close to Port Haliguen. It was very hot and sunny most of the time although a couple of nights we had some rain. They ate out a couple of nights and spent the late evenings watching films into the early hours. On Sunday, they planned the passage for the next part of the holiday. Also, as it rained most
of the day on Sunday I got a (much needed) clean. She seems to be managing very well on her leg so it must be improving.

Day 212 - 213
It was wet and miserable as we slipped the mooring at 8:30am and headed off - towards Jersey! This was 'plan B'. He said we had spent too long in Cameret and Port Haliguen to allow any travel further South. Anyway, despite the change in plan, they seemed very pleased with their time in Port Haliguen and agreed that they would return given the choice. There was no wind for most of the day and so we motored on flat seas. About 8pm the forecasted wind picked up and he was able to set my sails. By the time it got dark the wind was at 28kts (F5) and I was zooming along at 8 kts! It was very hairy going through the Raz de Sein and at one point Heading (direction you are pointing) and
Course (direction you are going) were 90 degrees apart due to strong winds and tide. If not enough, the other side has a 'washing machine' waiting for you and the waves were high this evening. However, for the most part, he steered close to land and missed the worst of it. Once through the narrow channel the sea settled to just 'rough' and we headed up around the outside
of Ile D'Ouessant. Overnight the wind dropped, come onto the stern and my sails started flapping so he dropped them and we motored on. Despite a forecast of F3 - F4 the wind didn't pick up sufficiently again and we motored into St. Peter Port. 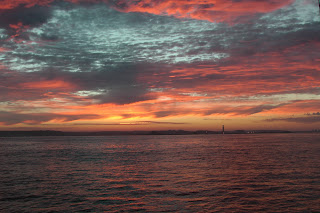 We arrived in St. Peter Port as the sun rose and were tied up on the visitor's pontoon by 7am. Thank God that engine has been switched off!!

They spent time going backwards and forwards to the shops and, when it rained heavily, to the cinema. Once they left on their pushbikes and had lunch in the Yacht Club - very nice! Looks like we're going home soon as he's checking tides and weather.

Day 216
Up early and off we went. Refuelled and headed out to sea. Wind very favourable and we were able to sail almost immediately leaving port. However, big seas meant it was a bit uncomfortable. Once out past La Corbiere lighthouse the sea flattened and eased a bit. We made very good time to Hanois Lighthouse and then on and up past the west coast of Guernsey.  Once land was out of site we headed towards Berry Head avoiding the Traffic Separation Scheme (but not the traffic).

We arrived back on the pontoon at Brixham just before 3am and they put me and themselves to bed. It was up early again and I was cleaned and they packed up and headed off. I think they're moving house soon!
Posted by SY Dawntreader at 01:23