Day 124
They brought their bags this afternoon and loaded them on board (why does she need so many clothes?). At 8:30pm I was started up and I took them out of the marina and just up to Berry Head before my engine was switched off and sails hoisted. Pointing me 153 degrees and with the wind on a broad reach, we went off towards Guernsey - see, I was right, he was planning this! The weather was ok but a bit cold. However, as the sea was 'slight' it was a cracking all-night sail!

Day 125
We reached the main shipping lane (westbound) at about 3:30pm. He normally keeps at least one eye open most of the night. However, we had a 'Mary Celeste' incident where he closed the other eye for a few seconds. Thinking we were about to collide with another vessel he had been watching, he changed course quickly. He later admitted it was my lights reflected in the pushpit rails he had seen (why does she leave him in charge of me overnight when we both know what he's like on his own - dangerous). I've noticed he wears his glasses a bit more these days - blind old git.
We finally reached St Peter Port at 10:15am, he tied me up on the waiting pontoon and went to bed for a couple of hours. By the time the tide came in and we could go into the marina we were treated to Guernsey's 'drought'. The wrong type of rain fell all day. That evening they went out for a meal - she must have paid because he was in a good mood they got back. 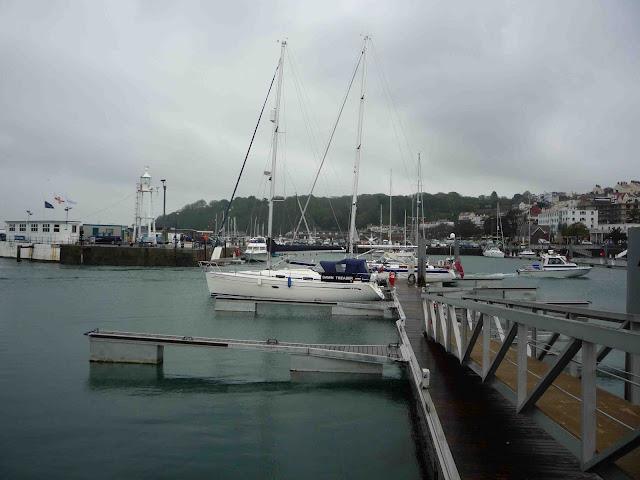 Day 126
They left me to go on the bus trip this morning. This is the £1 'round the Island tour' they always go on. Unfortunately the drought was severe and so they didn't see much. Didn't stop them having more to eat and drink though - I'm the one who floats! Did I mention the cold?

Day 127
He got up and moved me out of the marina at 8am. They had breakfast and then set me off home. Initially the sailing was good but by mid-day the wind disappeared and my engine started. It stayed on all the way home. Apart from him playing a game of 'dare' (and losing) with the big ships the return home was uneventful. He put me into our berth at 10pm and put me to bed. 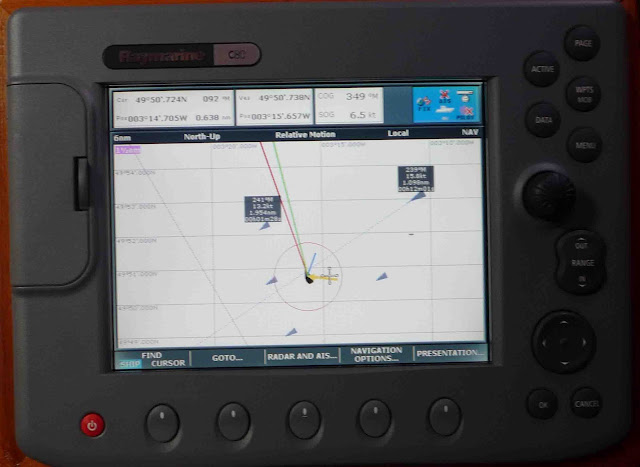 Day 128
They cleaned me up and decided to go home as the drought was still in force. Wonder how he's going to get back into the marina next time he's down - I didn't ask him to leave his swipe card behind.
Posted by SY Dawntreader at 13:33