Day 139
Wasn't sure if they would come this week as the weather doesn't look too good, but they arrived at the usual time this evening. Looks like we're going out tomorrow! Seems like Luke has had his offer accepted on a house in Weston-super-Mare - no need to be that excited though; you would be forgiven for thinking they were happy he was going. After a couple of drinks and watching television for a while they went to bed.
Day 140 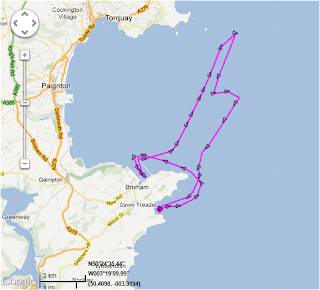 The weather was much better this morning and he got me ready to go out. With the tide running out and the wind from the NE F3-F4 he decided to go to the Ore Stone. Silly twit got his fishing rod out - he won't learn. After sailing to the Ore Stone (and not catching anything) they decided to turn round and go to St Mary's Bay and stop there for lunch. Just as we turned he spotted a dolphin and they messed about with it for a while before sailing off. Anchoring in St. Mary's Bay they also spotted a seal - let's not do any more fishing then. After lunch and a rest he upped anchor and we went home. It got interesting when the estate agent called and told them they had been made an offer on the house. Shame it wasn't enough - he refused it. Good boy!
Day 141
It P'd down all night so they decided to go home. Shame the car wouldn't start - he'd been in a good mood up till then. Looks like they won't be down next week as they're all off to Dublin for a party but he's going to take us to Jersey when they get back. I do like night sailing!
Posted by SY Dawntreader at 12:54