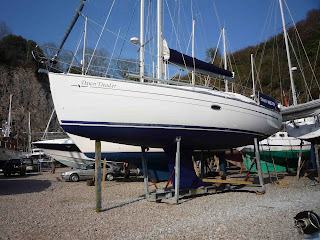 They both turned up in the late morning. I was being moved closer to the jetty in preparation for the big event when they arrived so, whilst waiting for this to be completed, they ate their lunch in the car. Once I was in place, they unloaded the freshly laundered and ironed bedding and other items taken away at the end of last season and he hauled them up onto my deck. She safely stowed these things below. Then both my sails were refitted, water tanks replenished and my engine run-up. Satisfied that I was ready for launch, they left me and drove off to leave the car at Brixham Marina car park. After they were back I heard them talking. On the return journey their taxi had dropped them off at the Manor Inn where they had eaten a meal and washed it down with a few beers and glasses of wine. It looks like she is going into hospital on 12th April for a knee replacement.  However, the biggest surprise to me was that they've finally put the house up for sale. So the 'Plan' is still on schedule after all!
Day 84.
The big day! He got up at 3:00am thinking it was 4:00am - later claiming to have mis-read his watch in the dark . He went for a shower anyway. The morning chorus (which had been starting progressively earlier with the coming of Spring) was already underway. When he came back on board he dozed off until 5:00am. He then got dressed and made a pot of tea. It was getting light outside but there was one concern - it was foggy. In the distance we heard the engine of the launch crane burst into life - not long now. Although not due until 06:45am, they came for us 30mins early. The slings were fitted fore and aft and I was lifted off the cradle and slowly moved to the jetty. After being lowered carefully into the water, they both got aboard and he started my engine. Satisfied we would float, the slings were removed and we slowly backed out into the creek - into thick fog! We inched out of the creek and down to Dittisham following the moorings as he knew these were either side of the deeper water. By the time we got to Dartmouth the sun had risen and the fog was behind us. We cleared Castle Ledge buoy, rounded the Mew Stone and headed to Brixham. Although bright and sunny, there was a cold edge to the wind. After an uneventful journey he backed me into our pontoon. I'm back home!
Posted by SY Dawntreader at 02:24