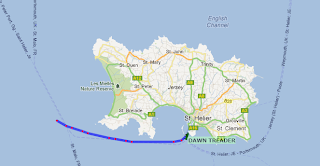 We thought we heard the Coastguard responding to Tantrum's routine traffic call at 2am but we were too far away to call her.  We had a cracking sail up until about 3am - then the wind stopped. It does that sometimes. As we were close to the shipping lane he put the engine on and we stayed that way until parked up in Jersey. Thick fog made the journey past Guernsey and onto the Hanois lighthouse very interesting. Radar and AIS prove their value at times like this. The fog eventually cleared about an hour from the lighthouse and the final part of the trip was uneventful. They went for a shower (not before time) and then disappeared into the shopping centre. I basked in the warm sunshine. When they came back I picked up some of the ongoing news. Luke has been outbid on the house he was buying and has pulled out of that transaction and is now looking for somewhere else. Their house sale is proceeding and the Surveyor is coming next week. It is likely they could be moving by mid-July. They're also looking at properties in Brixham - looks like I may see them more often in the future then.
Day 154
They went food shopping this morning and filled the fridge with seafood, salad and steak. Either they're having a party or they're preparing to disguise themselves in order to merge with some of the visitors who come to Brixham in the summer - you know, the Pie Eaters and Salad Dodgers. Why they go clothes shopping together I'll never know. Pistols at dawn would be simpler and more humane.
Day 155
Intermittant rain delayed them leaving early but eventually they did go out walking. When they got back later that afternoon it would appear they had caught the bus to La Corbiere Lighthouse and had lunch in the hotel there. A walk in the breeze and sunshine kept them in a good mood for the rest of the day. It's quite windy tonight.
Posted by SY Dawntreader at 00:30